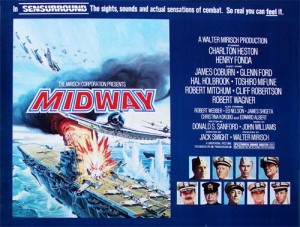 “Midway” is another one of those big, spectacular Hollywood war films with an equally big and equally spectacular cast … and you shouldn’t miss it – especially if you enjoy movies about war. “Midway” is second of four films to be released in “Sensurround” sound – a thundering bass to have the audience “experience” it – and it uses footage from other films in war sequences and just about everyone in Hollywood somewhere in the film. You won’t be disappointed because it is: (a) a World War II story, (b) a big screen spectacle film and (c) you see just about every actor alive that filmmaker could get in front of the camera. If you haven’t seen the newest version of “Midway,” then check this one out first … you’ll like it better.

A BIG MOVIE ON THE BIG SCREEN 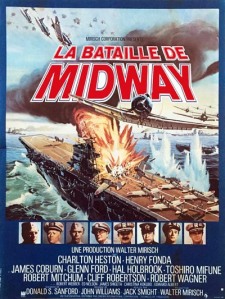 Big spectacle films have one serious pro-con: Bad performances are limited by the scarce screen time of most of the actors, but you never get enough of the good. So it goes with “Midway,” the big screen spectacular from 1976 that was the second of four films released in “Sensurround” sound. It featured a thundering bass that “moved” the audience to be able to “experience” the action in the film. You get great performances but not enough from Hal Holbrook, James Coburn and Toshiro Mifume (although his voice is dubbed in English).

The biggest players with the most screen time are Henry Fonda as “Adm. Chester Nimitz” and Charlton Heston as “Capt. Matt Garth.” Both are solid and convincing, especially Heston, who plays a fictional character whose career and life weave through and tie together all facets of the story amid actors playing real historical World War II heroes.

If you need to know the plot about the film (it is the most important battle victory in the Pacific for the U.S. in WWII), here it is: The Japanese are looking to knock out the U.S. fleet in the Pacific once and for all and have chosen Midway Island as the battleground less than a year past their attack on Pearl Harbor. The U.S., with intelligence leading the way with details of the Midway plan, counters with fortitude, strategic creativity and fighting tenacity. 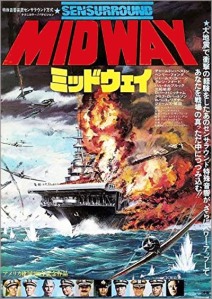 Enough of the details and it’s no spoiler to know that the U.S. wins.

“Midway” uses footage from several other war films, most notably from 1970’s “Tora! Tora! Tora!” (click here for my review) about the Japanese attack on Pearl Harbor, as well as offering extensive use of archival battle scenes from the U.S. military.

Instead of a chronological rehash of the film, I’ll go at it by listing some of the cast, how they performed and the context of their careers (details about actors’ careers is via IMDb.com):

Even the headliners don’t get much time in this one even though it is more than two hours in length. With such a lack of time, it’s almost impossible to give a grade for their work (good or bad). So, here’s a rundown of some of the lesser characters and who plays them:

Here are other cast and film notes via IMDb.com: