You only have to look at the title of “CHIPS” to tell that it is pure crap. In remaking the venerable TV series into a movie (I refuse to call it a “film” or “motion picture”), these people couldn’t even properly present the name. “CHIPS” is supposed to be “CHiPs” like the TV show got correctly – the CHP stands for California Highway Patrol and the lower case “i” and “s” flesh out the acronym to a word. After the title fiasco, it only gets worse (and most people wouldn’t notice the title mistake). Simply put, “CHIPS” is a bad movie; it has very little passing for what could ever be evaluated as acting; it completely tortures the story premise of the TV series along with torturing the audience; and the writing and directing are more on a level of a high school play. Only one real bright spot for “CHIPS:” The original “Ponch” has a brief guest spot!

(NOTE: I updated this review with the box office total for “CHIPS” on Jan. 28, 2018. I edited the review and corrected a misspelling of Dax Shepard’s first name and fixed several typos on Aug. 9, 2018. I expanded the review to update links and add some additional criticism on Jan. 31, 2020.) 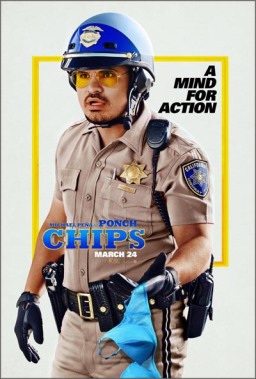 Do yourself a favor and don’t watch “CHIPS.” If you have seen it, please consider ordering yourself an exorcism on vatican.va to eliminate nightmares and prevent you from considering never to set foot in a theater again. I can think of only one reason to even attempt to watch “CHIPS:” The two headliners, Michael Peña and Dax Shepard, actually have some chemistry when they bicker. Too bad the vast majority of the movie is more like a colonoscopy without anesthesia … or lubricant.

I wouldn’t mind updating of the TV show, just as I didn’t with “The Dukes of Hazzard” (click here for my review). However, that one didn’t change just about the entire scope of the TV show. “CHIPS” keeps only a couple of things from the original: There’s “Ponch” and “Jon” and they are on the California Highway Patrol. That’s it.

Oh, wait. “Ponch” isn’t really “Ponch.” What? Well, it goes without saying that the ignorant filmmakers made “Ponch” not really the original “Ponch,” and in this one “Ponch” is the veteran and responsible, while “Jon” is the off-the-wall newbie. Plus, “Ponch” isn’t really even part of the CHP. Wow. These idiots couldn’t even keep a simple concept straight, but I guess they thought this was one way to put their own stamp on the reboot. Too bad there wasn’t a shoe-print on their backsides sending them out the door before this one was released. 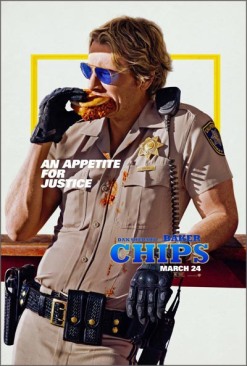 By the time you get to know that “Ponch” isn’t really “Ponch,” it’s too late to turn off the flick for any true movie buff. And, in the most ironic note, “CHIPS” is my most critical review, but within a year became the most-read single review on my blog (it had 1,270 page views on the morning of Aug. 9, 2018, and that’s 400 more than the No. 2-read review) and the second-most read behind the home page. By the date of the 2020 update of this review, the page views had surpassed 2,500 page views (which is second to my blog’s home page total of 4,971).

From a simple TV premise of a staid, veteran officer watchdogging a young officer on probation, you get the world’s oldest rookie (Shepard as former extreme biker “Jon Baker”) and a federal agent “Castillo” (Peña using the assumed name “Franklin Llewellyn ‘Ponch’ Poncherello”) who’s going undercover as a CHP officer to nail bad guys who are cops. Ouch! Even the “Baywatch” (click here for my review) movie stayed truer to the TV show. Another stinker that didn’t stay true is Nicole Kidman-Will Ferrell’s “Bewitched.”

Plus, the incompetent Dax becomes the second “star” in a cowpie-level film being an “extreme” “athlete” as there was one in the horrid remake of “Point Break” (click here to read the comparison of that duo of movies).

It’s always good to be able to suspend your disbelief when trying to enjoy entertainment, however, it’s impossible with “CHIPS.” Every piece of the movie is contrived, stupid and an insult to the intelligence of the audience. And, since this piece of crap is listed on IMDb.com as the idea of, under the direction of and the co-starring of Shepard, he deserves all the blame. If he didn’t ever have another role or anything to direct, then that would be simple justice for the making of “CHIPS” and forever shaming the memory of the TV show (click here for my look at the TV series).

I can’t bring myself to examine much, if any, of the details of the rest of the film. There’s a CGI component (a decapitation is the obvious one) and “CHIPS” doesn’t know whether it wanted to be a visually exciting film with CGI or it was added later since there is such little else left in the movie. The sexual component of the movie is depressingly degrading to the actors and at times truly vulgar. I don’t mind puerile, vulgar humor (check out “Harold and Kumar Escape from Guantanamo Bay” – click here for my review), but this goes way beyond “The Hangover” franchise (click here for my look at it) or “We’re the Millers.”

Alas and unfortunately, I have to take a look at some of the principal cast if I’m going to review this stinkbomb:

Not a single Oscar nomination among them. Oh, well, I didn’t expect there’d be one from this group (although D’Onofrio is truly a solid actor and should have gotten one for his “Pvt. Pyle” character).

On the uncredited side, you get some actors whose talent is wasted or, in one case, the effort is lost amid the dreck. They are probably glad their names do not appear on the credits:

I won’t look at other actors who play CHP officers. Some show a spark of talent, but in this deep, dark mess, they don’t have any chance to shine. However, here’s one you might want to remember: Rosa Salazar as “Ava Perez.” Salazar is watchable and has been in “Insurgent” and her resume is mostly from TV.

I also won’t point up the gaping holes in the plot. As I already wrote, it’s good to suspend your disbelief, but, c’mon. Some of the stuff here doesn’t need suspension of disbelief, it would take a prefrontal lobotomy.

So, there you have it. “CHIPS” stinks and I can’t write it any other way.

Of course we don’t know how far down the rankings of movies for 2017 that “CHIPS” will fall by the end of the year, but at the writing of this review on July 8, it was the 49th ranked movie with $18.6 million, according to Box Office Mojo. The only thing left to see is if it will go into triple digits by Dec. 31. The No. 1 film as of July 8 is the update of “Beauty and the Beast” with $503.9 million, followed by “Guardians of the Galaxy Vol. 2” with $384.7 million. “CHIPS” was the first film from 2017 that I reviewed for this blog.

UPDATE: In the final totals for movies released in 2017, “CHIPS” earned a ride on the express elevator down to 106th position with moviegoers. Its final total didn’t increase after I reviewed the film and the anemic $18.6 million stands today, according to Box Office Mojo. Here are the other films from 2017 that I’ve reviewed: