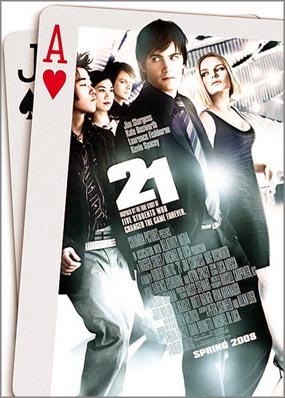 Blackjack is my favorite casino game … it’s fun and you can use some strategy to do OK (but, remember, the odds are always against you). However, teams of card counters from the student body of the Massachusetts Institute of Technology are legendary in how they beat Las Vegas casinos out of millions over the years. The film “21” takes a look at one of the teams and is based on a book about the organizer of teams. “Bringing Down the House” by Ben Mezrich is almost unbelievable in the telling how the students manage to count cards (the practice is not illegal since it doesn’t involve actual cheating or use of a device, but is battled by casinos whose owners can ban such players). “21” manages to push the emotion of characters and flash of Vegas over the dreary repetition of learning to count cards – and it actually boils this down pretty well. It’s not a great film, but one done well and very watchable.

(NOTE: I expanded this review with additional opinion and trivia and the updating of links on March 16, 2019.)

Movies about gambling are popular with Hollywood – just look at “The Hustler” from 1961 and its 1986 sequel “The Color of Money” to 1965’s “The Cincinnati Kid” (click here for my review) and “Rounders” in 1998 (click here for my review). All are excellent films and not just films about gambling. Another one that’s not quite the cinematic equal to that trio but is solid and worth watching is “21” with Kevin Spacey.

“21” is the fact-based amalgam of stories about a series of card counting teams recruited from the student body of the Massachusetts Institute of Technology over the years. Its members were math whizzes from the obviously math-whizz heavy MIT. For those who do not know, card counting is where someone (or a team) track by memory the cards played in a blackjack “shoe” (a device holding several decks of cards). By knowing the “count,” the members know when it is advantageous to bet. It’s not illegal, but casinos hate card counters and legally bar them. Spotters and facial recognition technology help the casinos even against the innovative strategies developed by the teams.

The movie is taken from a book by Ben Mezrich and the story begins with the recruitment of Jim Sturgess, who plays “Ben Campbell.” He’s a top-flight student needing help with money after being accepted into Harvard’s medical school and a professor (Kevin Spacey as “Mickey Rosa”) spots his potential in class and then gets him onto the current team he has organized. Sturgess at first doesn’t want to join but he does (that’s why he’s in the movie, duh) and the story plays out as he takes over the top playing position over another veteran in the group. Of course, this causes problems among the team and with Spacey.

At the same time the casinos begin to take notice of the team in action. Their main opposition is security expert “Cole Williams,” who is played by Laurence Fishburne. He is always hot for cheats, but his days are numbered because technological advances in security cameras and systems (plus mechanical card shufflers) that rely less and less on the human element. Finally, Fishburne has built up his own score to settle with Spacey.

The film concludes by winding through a series of double-crosses and misdirection in the plot. Fishburne, who caught Sturgess and physically beat him, made a deal with the younger man in order to catch Spacey. Despite having dismissed Sturgess after a conflict, Spacey agrees to make a final trip to Las Vegas with him and this is the capper for the film, which ends with Sturgess telling a surprise twist to his story.

All in all, the film is good and the action is tight and it doesn’t get lost in the minutiae of how the MIT students developed, expanded and used their card-counting skills. There’s just the right amount of Vegas glitz that big players get from casinos and the personal foibles of the characters add a nice touch.

Now, let me look at the main players (pun intended) …

Las Vegas casinos probably enjoyed the attention that the film generated, both as flash as well as a tough attitude on card counters. However, remember, this is just a movie. Casino security is good and doesn’t any longer rely on physical threats (not in this litigious age and their corporate ownership).