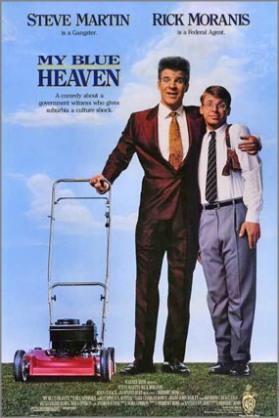 DON’T TELL THIS MAN THE WORD ‘NO’

(NOTE: I expanded this review with some additional opinion and trivia, fixed typos and corrected the misspelling of a supporting character’s name and the updating of links on Nov. 17, 2018.)

If anyone can turn a successful mobster likeable – even one who was present for at least one murder about which he cracks a funny story, then it’s Steve Martin. Yes, you know, “The Father of the Bride.” Well, in “My Blue Heaven” he’s manic, certainly ADHD and is completely entrepreneurial and a capitalist. As “Vincent ‘Vinnie’ Antontelli,” he’s a New York thug who ratted out his former friends and is now being relocated by the government.

Martin is a habitual criminal: he can’t stop trying to steal even from his soon-to-be ex-wife as they’re moving into the home provided by the FBI and at the same time lying about his Social Security number (he obviously doesn’t know anything about one). Best yet, Martin does such a good job that even though his character remains flawed, he’s funny, bewildering and, at his core, loyal.

The plot of “My Blue Heaven” is how Martin doesn’t easily settle into witness protection (his new name is “Tod Wilkinson”) and quickly takes back up with crime after he’s recognized by an old colleague and has a touching reunion with other mobsters, including one at whose funeral he was a pallbearer … “I appreciate it, Vinnie!” he tells Martin.

From his FBI handler, whose wife just left him and finds love with the local prosecutor who has Martin in her sights, to subplots about turtles, kids baseball and becoming a self-improvement guru, Martin careens like a pinball through everyone’s life and actually making each one better – although it doesn’t always appear so at the time. The plot, while straightforward, is intelligent and doesn’t insult anyone’s intelligence in trying to get a laugh.

Now, let’s look at some of the cast:

You’ll find especially good work between Moranis and Cusack. The best example is a party scene where they dance. Moranis, as he begins his personal evolution, has learned how to tip to get a song played and then dances with Cusack. The run-up conversation is fun and the dance sequence is neat (but not as good as the “merengue” to come – everyone dances in this one).

Oh, yes, in a role unfortunately easy to forget but deserving of your attention, Bill Irwin plays “Kirby,” who is Moranis’ partner in the FBI and an eager-beaver (but kind of clueless) agent looking to actually see a criminal since financial fraud takes up a lot of research and little actual law enforcement. Irwin, who was in “How the Grinch Stole Christmas” and “Hot Shots!,” is good and has an especially nice dance solo at the party where other agents look askance at his moves.

The rest of the supporting cast is surprisingly deep and I’ll run through the best somewhat quickly:

So, from an old life to a new one, Martin plays “Vinnie” to the fullest. Of course, there’s a nice ending where Martin is the hero for everyone from the local Little League team (you know the home team will win because Hickey is the umpire), his new family, his friends, Moranis and Cusack and, of course, the audience.

It’s interesting to note that Martin’s character is somewhat based on the real-life mobster Henry Hill from “GoodFellas” fame. The writer of “My Blue Heaven” (Nora Ephron) was married to the writer of “GoodFellas” (Nicholas Pileggi) and they reportedly used conversations with Hill as research for both films. Hill was a notorious gangster who turned state’s evidence against his friends and was relocated by the government. He returned to a life of crime while in witness protection and died in 2012 (ironically that was the same year of Ephron’s death). I’m sure he wasn’t as funny as Martin.