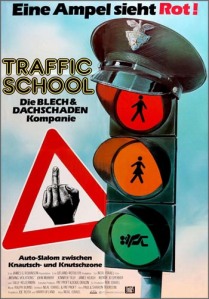 Sometimes you find yourself enjoying a movie that is so terrible that you cannot describe what the people on screen are doing as “acting” (or you put quote marks around the word). Most often, you’ll look for a sickness bag if you manage to watch movies such as “O.C. and Stiggs” (click here for my review), but today I’ll give you one of those stinkbombs that you can get through: “Moving Violations,” a film from 1985 with a lot of promise and one that falls flat from the first scene. It’s difficult to convey just how crappy this film plays out. Still, like passerby slowdowns after a car wreck, you can watch this one … maybe once.

REALLY A BAD MOVIE, BUT YOU MIGHT ENJOY IT

(NOTE: I expanded this review with a little additional opinion; some more trivia; and the updating of links on April 9, 2017. I again expanded the review on March 29, 2020.)

With a sports analogy I’ll say that “Moving Violations” is a film with good statistics coming into the game. It has a very competent cast, including a rookie with potential; it has a director whose previous film was just the year before with the hysterical “Bachelor Party” featuring Tom Hanks (click here for my review); and it has a creative storyline.

Further they even had it on movie posters as “from the creators of Police Academy.” All in all, it should have added up to a big hit.

Well, what happened to create this train wreck?

Ahem. None of it happened with “Moving Violations.” There’s no other way to describe it: “Moving Violations” is a truly awful film, but like some ugly dogs that are so ugly that they’re cute, it is funny in at least one place and I can imagine several different worse ways you can spend your time than watching it. Please understand that I still enjoy stupid slapstick comedy at any level (especially low) and that my opinion of this one hasn’t evolved because I’ve matured.

OK, in short about the plot, the characters here are bad drivers caught up in traffic school that is nothing but a scam for the judge and one of the police officers. The bad drivers are guaranteed to fail the class, their vehicles are then sold at auction and the judge and the cop pocket the money. Ouch. A plot it is not.

The two rough-and-randy (yes, I meant randy) cops here are James Keach as “Deputy Henry ‘Hank’ Halik” and Lisa Hart Carroll as “Deputy Virginia Morris.” They’re more than partners although he’s partnering on the side with someone else. Both efforts are wooden and contrived but I don’t blame the actors since this whole film is a mess.

The only actual truly funny scene in the film is when the two cops see Murray standing next to a car and order him to move it because it’s parked next to fire hydrant. Of course, he refuses and then they plan to write him up for violations such as broken headlights and taillights (which they bust with their nightsticks in order to create the violations). The scene plays out really funny because the car belongs to Conrad. Naturally. You see it coming from a mile off and it’s the only funny full scene in the entire 90 minutes of “Moving Violations” – remember, Peller’s laugh is one line.

The plot gets so downright stupid that there’s a scene where one of the bad drivers comes to believe another (played by funnyman Fred Willard) is a medical doctor. He’s not. He’s a “doctor” of cars. She winds up naked on a rack at his shop. Cue the rimshot, or, rather, don’t cue the rimshot.

So, watch this one only if by a million-to-one chance it crosses your TV screen and you have absolutely no ambition to change the channel. You can also catch it on youtube.com … if you really want to see it.

Amazingly, “Moving Violations” managed to be the 79th ranked film of the year at the box office with $10.6 million, according to Box Office Mojo. I would have thought it easily was in the triple digits. The No. 1 film was “Back to the Future” with $210.6 million and the No. 2 was “Rambo: First Blood Part II” with $150.4 million. However, “Moving Violations” did manage to beat out the equally dreadful “Gymkata,” which is a film about a champion gymnast in some silly competition/spy game which stars real life Olympic gymnast Kurt Thomas. He’s even worse than Murray is here (if that’s possible). Here are the other films from 1985 that I’ve reviewed: