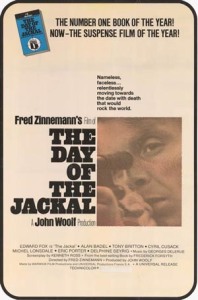 ‘The Day of the Jackal’
(1973; 143 minutes; rated PG; directed by Fred Zinnemann and starring Edward Fox and Michael Lonsdale)

AN INTENSE STORY THROUGH DRAMA, NOT SPECIAL EFFECTS 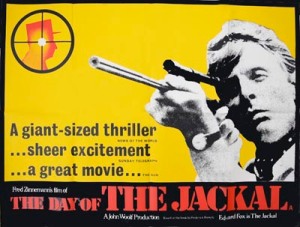 Most impressive is that “The Day of the Jackal” is the gold standard in how to bring a novel to the big screen. It is adapted from Frederick Forsyth’s bestseller and is the story of a plot in the early 1960s by dissident elements of the military to kill French President Charles DeGaulle and overthrow the government. While other plots and dissidents are historically accurate, the Jackal part of the plot is fiction (well, maybe …). 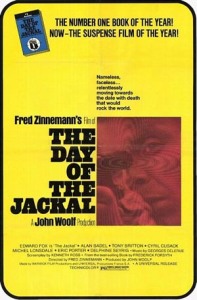 The film’s geography has been altered across Europe from the novel’s details to better fit in with streamlining the film for the screen. It works and works well, as does Kenneth Ross’ adaptation of the novel. Ross does a great job writing a screenplay that is close to the novel without getting it bogged down in unnecessary details.

For example, the really detailed explanation in the novel that surrounds the initial assassination attempt and the capture of the conspirators and would-be assassins are compressed into a quick shoot-’em-up scene just after the opening credits and then one line by the film’s narrator wraps up dozens of pages of the novel with a quick “six months later” comment about the capture and trial of the conspirators.

While the storytelling by director Zinnemann easily surpasses 99.9-percent of films released today, the acting, while never overly emotional or wrung out in fits of pique by characters overwhelmed by emotion or events, is merely solid and can be admired for nearly total understatement.

Zinnemann is the true superstar in the production, having directed such classics as “High Noon,” “From Here to Eternity” and “Oklahoma!” in a career that began in 1930 and concluded with 46 directing credits with 1982’s “Five Days One Summer.” Zinnemann is a director’s director, who has six Oscar nominations to go with his four statues, and knows how to tell a story and it becomes obvious that by not rushing the pace he continues to build tension without turning to grandstanding or cinematic tricks to solidify his hand.

Now, for a look at members of the principal cast:

The rest of the supporting cast isn’t much to write home about, with the exception of the gunsmith played by Cyril Cusack, who was also in “Harold and Maude” and “My Left Foot.” Cusack has crafted a role that fits so well with the personality of the character and carries it off flawlessly. His career incredibly begins with a credit from 1918 when he was 8 years old (“Knocknagow,” according to IMDb.com) and spans seven decades, ending the year of his death of motor neuron disease at 82 in 1993 with a TV episode of “The Young Indiana Jones Chronicles.”

It’s worth your while to find and watch “The Day of the Jackal.” Read the book, too, it’s as good a read today as it was when it was first published in 1971.

“The Day of the Jackal” made $16 million at the box office, according to Wiki, and it never was tops at the box office in 1973 as it was released while Bruce Lee’s “Enter the Dragon” was dominating at U.S. theaters. The No. 1 film of the year was seven-time Oscar winner “The Sting” with Paul Newman and Robert Redford. Films I’ve reviewed from the year include:

Other cast, film and book notes (via IMDb.com and Wiki):